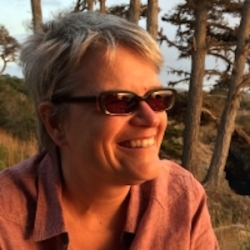 After more than two decades at the University of California at Davis, I was delighted to join San Francisco State as Professor of History in Fall 2012 to assume directorship of the Paul K. Longmore Institute on Disability.

My love of scholarship came like a bolt of lightening while sitting in a freezing Parisian classroom during my junior year abroad. Even though I probably understood less than half of what the excited professor was saying about filth and disease, that moment would shape my entire life. An undergrad research paper led to a Ph.D. dissertation, which explored the symbiotic relationship between epidemics and society, served as the basis of my first book, Cholera in Post-Revolutionary Paris: A Cultural History (University of California Press, 1996). While writing, I was constantly aware of how the raging AIDS epidemic helped influence my questions and ideas about what it meant for a society to live through an epidemic crisis. At the same time, without my realizing it, cholera was priming me for disability history by laying the intellectual foundations for understanding interactions among government, disease, public health, and "problem" bodies.

I came to disability history by accident as I cast about for a new research topic. In the early 1990s I didn't know of anyone who studied disability as anything but a medical problem that needed to be fixed. If someone had asked me whether it was worth exploring, I would have clicked off, probably pleading ignorance and believing it was too remote from "real" history to have much intellectual value, even as I claimed to be interested in the oppressed people hidden on the margins of history.

And somewhere deep inside, I know I was blushing, feeling frightened and vulnerable. I'd spent my life pushing ahead as if I didn't have anything wrong with my eyes, when in fact I'd been born totally blind with cataracts. While I'd benefitted from gaining more and more sight thanks to a series of operations throughout my life, I cringed at the word "miracle." I just wanted to be like everyone else, a challenging task because even after all the interventions my vision remained, in the words of one blunt doctor, "pretty darn crappy."

I live with a condition called "nystagmus," which makes it difficult for my eyes to hold a focus long enough for my brain to process what it's seeing. This puts me somewhere on that broad continuum between seeing nothing and seeing it all, a place that changes for me situation by situation, context by context. It helps explain why I now choose to use a white cane sometimes and not others, why I ride a bicycle sometimes and not others, why I use assistive technology on my devices sometimes and not others. Above all, it explains my own interest in disability as a complex, contingent, morphing condition, one shaped by interactions between evolving individuals and the constantly-changing societies we inhabit.

Such enlightenment came only after the rude shock of learning that I had been passed over for an academic job because of concerns that my vision would prevent me from teaching a large class. It was just before the 1990 Americans with Disabilities Act (ADA), a law that I didn't know about because it would be years until I understood it applied to me. Yet something about the experience galvanized me both personally and intellectually. For the first time I saw connections between people marginalized in the past and my own situation. I wanted to apprehend what forces nurtured prejudice and how societies could take so many outdated ideas for granted. How could my knowledge of the past help explain these cruel dynamics and keep them from playing out again and again for others? How could I convince my fellow academics, students, and the public to question the status quo?

My scholarship in disability history engages these questions. With Dr. Zina Weygand in Paris I translated and published the Writings of Thérèse-Adèle Husson, an audacious young blind woman, who in the 1820s decided she was becoming a burden to her family; she left her provincial town and made her way to Paris, where she made a living as a writer, publishing nearly a dozen novels before she died in a fire at the age of 29. In addition to finding her unpublished manuscript about her experiences as a blind person, we uncovered traces of her life in French archives, making this one of the earliest known accounts of a woman writing to others sharing the same disability. Given my early interest in epidemics, I came embarrassingly late to thinking of Husson, who had been blinded by smallpox, as an epidemic survivor, a framing that led me to consider epidemics not just in terms of the initial outbreak and crisis, but also in terms of survivors who went on to have a profound impact on everything from government policies to popular culture. This has placed me at the center of conversations between disability history and history of medicine, fields that might be considered both "rival siblings and conjoined twins."

No doubt influenced by the Longmore Institute’s mission to build bridges among scholarship, activism, and the public, my writing has taken an unexpected turn, to speculative fiction. For the past three years, I have risen each morning around 4:00AM to devote an hour to what I call my “social justice thriller,” a novel that incorporates insights from disability studies and the historian’s vanishing art of storytelling. In summer 2019 I won a coveted artist residency at the MacDowell Colony where, thanks to the Flora Nichols Beggs Fellowship, as an artist with a disability I made real progress.

Informed by this research and creative work, my teaching invites students to reflect upon disability as a valuable category of experience, much like other forms of human diversity. History of medicine, gender history, histories of disease and public health, all influence my approach just as I seek to introduce fundamental questions about disability into these areas. As I tell my students, we're entering uncharted territory ripe with possibilities. Invariably they light up, realizing that they're being let in on a secret before anyone else. I view my role as director of the Institute to share the secret far and wide.

Listen to a podcast to learn more about Cathy's journey to where she is today here!