"The Past Permeates the Present:" An Interview with Disability Historian Laurie Block

Recently, Longmore Student Fellow Anna Goose sat down to talk with Laurie Block, about her two-hour film biography work-in-progress, Becoming Helen Keller. This long-term project first started about 16 years ago when Block began searching for a way to “look at disability history in a documentary film that…would bring the general public closer to understanding why the disability rights movement was needed.” Block explained that 60 years ago, the two most famous disabled people in the world were Franklin D. Roosevelt and Helen Keller, both of whom graduated from Harvard University in 1904. “FDR’s life and work has been studied extensively, but it was disability advocates who brought his disability into public focus.”

Block added, Keller’s fame relies largely on an “overcoming disability” narrative; what she did to earn a living and her role as a pioneering advocate are largely overlooked.

Block chose Keller as a subject in her ongoing media work in disability history because “everybody knows her name and something about the legend” and in seeking government and foundation grants to make her film, she thought, “Who could say ‘no’ to a well-researched documentary film about Helen Keller?”

Helen Keller’s story is one that many people think they know, Block says, but “the quality of the knowledge and attention that [Keller] has received…is very limited,” and “it often reduces her story to the first three weeks after Ann Sullivan arrived.” Keller lived from 1880-1968, and she worked well into her 70s. Most people encounter a snippet of Keller’s life story, and depending on their own life experience and opinions, they think it’s the whole story, Block explained. “It could be the fact that she supported suffrage, or Eugene Debs--the socialist candidate for president, or that she did Vaudeville. It could be the innumerable jokes about her, or her supposed saintly optimism. Becoming Helen Keller exposes the backstory to the mythology. It looks at Keller’s life within the historical context of people with disabilities, women’s rights, the development of then-new media, the methods of advocacy available in her lifetime.” In this way, Block hopes, a broad audience will come to “see Keller differently, come to know and understand newly what her experience was.”

So how exactly does this film make its case? “In the early part of the film, we look at her education, and at the books that were available to her—what was in raised print and braille. How her education was paid for, who made the choices in Keller’s learning to speak, to go to this school or to that one. 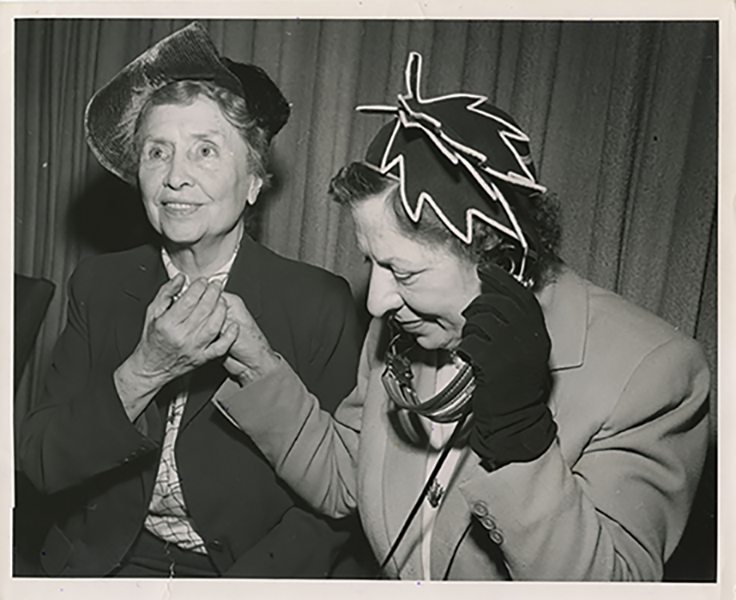 We show how her celebrity was established in the media, and in the second hour the same themes continue about agency, celebrity and media power, access to or the lack of accommodations in education and employment. How Keller earned a living as a college-educated disabled female celebrity and adult-disability advocate lets us look at the obligations and responsibilities of society to people with disabilities that prevailed in her lifetime and vice versa: what was expected of people with disabilities to society? These obligations and expectations change over time for many reasons.”

Another way Becoming Helen Keller is different from other versions of Keller’s story is the involvement of the disability community in the making of the film.

In the earlier stages of the project, Block engaged with Kathi Wolfe, a blind poet who has written about (and sometimes in the voice of) Keller—how she received Keller’s story and what she made of it for herself. Several leading scholars of disability history advised and some also speak in the film. Block conducted interviews with Deaf advocates in New England, and others from Gallaudet University. She interviewed over a dozen blind people from all walks of life in the Massachusetts area about how they first encountered Keller’s story and what, if anything, about her influenced them, and how their understanding changed over time. There were hard aesthetic problems to solve as well. “How do we keep the audience from ever forgetting that the way Keller received information and conversationally expressed her thoughts was never typical?” A palette of motifs was developed: tactile sign language and braille are projected as an element of the film’s environment.

“The hands you see in these film elements belong to members of the Gallaudet University and Perkins School for the Blind communities… The on-camera host-narrator will use American Sign Language. We are hoping that Howie Seago will take this role.” Becoming Helen Keller is currently in its final funding effort, and a Kickstarter fundraiser (http://kck.st/2F8YaWf) is underway to raise $45,000 to finish editing the second hour of the film. When asked why people with disabilities should support this project, Block’s response was this:

“The past permeates the present, and knowing how we got to this present, how it was shaped broadly, means thinking not just about us and what we do today, but about the generations that came before us. Historical thinking is essential for understanding who we are within identity communities, but also who we are as a nation.”

Keller using tactile sign with (from left to right) Anne Sullivan when Keller was a child, then adolescent. Keller in the 1930s with Nella Braddy Henney and Polly Thomson. Keller in her late career with Polly Thomson

To check out the Kickstarter, visit: http://kck.st/2F8YaWf For more information about Becoming Helen Keller, visit: https://www.becominghelenkeller.org/