In My Mother's Eyes, and Mine

The following blog is cross-posted from an Opinion piece by Catherine Kudlick, which was part of:  The New York Times weekly Disability series

I was blindfolded. My legs dangled off a chairlift high above the Colorado ski slope. I nervously licked at little bits of snow that tickled my lips. I was 43, and this was my first time downhill skiing. Whenever the contraption shuddered and bumped, I was convinced that we had become unhitched from the cable and were about to plunge to our deaths.

But assuming my experienced guide was right and we survived the ascent, what then? What should I do with the poles at the top? What if my skis got tangled up? What if the chair knocked me unconscious after I’d dismounted? And how would I explain this to my mother? I recalled the day not long before when I first broached the topic of my coming training at the Colorado Center for the Blind in Littleton. Hoping to appeal to her adventurous and quirky side, I explained that the program was a bit like Outward Bound. For those who had even slight partial vision, as I do, it involved wearing sleep shades as you did activities — including skiing — that most people assumed could be done only by the sighted. Mom agreed that this training would help my research on the history of blind people. As a social worker who had been active in the League of Women Voters studying inequalities in the juvenile justice system, she approved of my scholarship on marginalized groups.

But accepting that her daughter belonged to one of those groups was another matter.

After all these years, the idea that I might be blind enough to benefit from the program didn’t seem to register. I was born two months premature and totally blind with cataracts. Then several months later, I startled when my dad used his new camera flash to take a picture of me nestled in a butterfly chair. This wasn’t supposed to happen. Realizing that my eyes might actually be functioning, my parents whisked me off for the first of what would be a series of operations that would punctuate my life, initially giving me sight, then improving it, then saving it when it almost disappeared, and later improving it again. These procedures ultimately allowed me to see about 10 percent of what fully sighted people do. Thrilled that I wasn’t completely blind, I grew up as a profoundly visual person who believed in medical miracles. Each surgery brought some new discovery — the flicker of a candle, shiny wrapping paper, our silky black cat asleep on the golden chair. Everything I could see excited me and still does.

But while most people fear blindness because they perceive it as being lost in the dark, I associated it with being thrust into the spotlight.

It was easy to pretend that I had decent vision until the taunting began in elementary school. My cataracts left me wearing thick bifocal glasses and with a condition called nystagmus, rapid muscle movements that make my wandering eyes carry on a rich life of their own. The more I try to hold them still, the more they move. When I was a kid, a doctor explained that my eyes were “always looking for something better to see.” For me, it wasn’t always so poetic. One of the many operations I had as a young adult required the surgeon to carve out a larger hole in both pupils, with the painful consequence that my eyes are permanently dilated, and thus extremely sensitive to light. I have trouble walking outside at night or in crowded, chaotic places such as airports or hotels. When I’m tired or anxious, my visual world essentially disappears. I can use only one eye at a time, which means I lack depth perception, and I’m easily confused by shadows, brick walkways, curbs, steps and changes in floor texture. I can’t say for certain when shame obscured all the other complex feelings about my poor eyesight; I only know that unless it involved the miracle in the butterfly chair, we seldom talked about it at home. Nor did we talk about something even more taboo: my mother’s own eyes, and the idea that I inherited my vision problems from her. Mom functioned through most of her life with one poorly working eye that nobody wanted to admit was rapidly getting worse. As a child, I somehow never connected the fact that I had the only mom in all of suburbia who didn’t drive with my friends’ questions about why her eyes were different colors. Because Mom didn’t wear glasses and Dad did, I grew up believing that he was the one with eye problems. To be fair, we had many enablers to help construct a comfortable, dishonest world. Because blindness induces so much fear in everyone, friends, teachers, store clerks and even ophthalmologists colluded to turn my mother and me into people who appeared to have far better vision. At a young age, I’d memorized the seldom-changing eye chart so I could perform better on eye exams. I hadn’t set out to deceive anyone; I simply wanted to make people happy because they acted so pleased when I improved. So when I’d told her about the Colorado Center for the Blind program all these years later, she said: “But, Cath, you never needed a blind school before. You’ve even been teaching college!” Then, with concern in her voice, she asked,

“Has something changed, baby?”

I struggled to find words. Yes, things had been changing. But it wasn’t about what my eyes weren’t seeing; it was about how I was coming to see myself. After decades of pretending to be someone with decent eyesight, I was at last ready to confront this blindness that always hovered at the edges of my world. Skiing with a blindfold was just the beginning.

I’d like to say we were finally able to speak about this freely, but families being families, we never did. I wish we were able to have chided each other for allowing stigma to pull the wool over our eyes (pun intended!) for so many years. We might have bonded over how much work it takes to spend day after day pretending to see the world just like everyone else. We might have even credited our poor eyesight for giving us a fresh perspective on things that fully sighted people take for granted. Imagine swapping stories about how we coped, about absurd situations, about how we made alternative sense of the world! But, honestly, I didn’t need my mother to do this. Growing up before disability rights and with a mother who berated her for being flawed, my mom had perfected her own strategies and blazed her own trail. Surely, she faced self-doubt and pushed past both her own fears and those of others. She cultivated nonconformity and invented tools to deal with having to give up a career in New York City in order to be a good wife hauling kids and groceries on a bicycle in suburbia. In the face of such love and courage, who am I to insist she add embracing blindness to the mix? When at last my ski guide told me the chairlift had reached the top, I was surprisingly calm. I even imagined taking Mom skiing to thank her for the inner strength and audacity that led me to the top of that mountain in the first place.

Then again, she was right there, just as she has been all along. 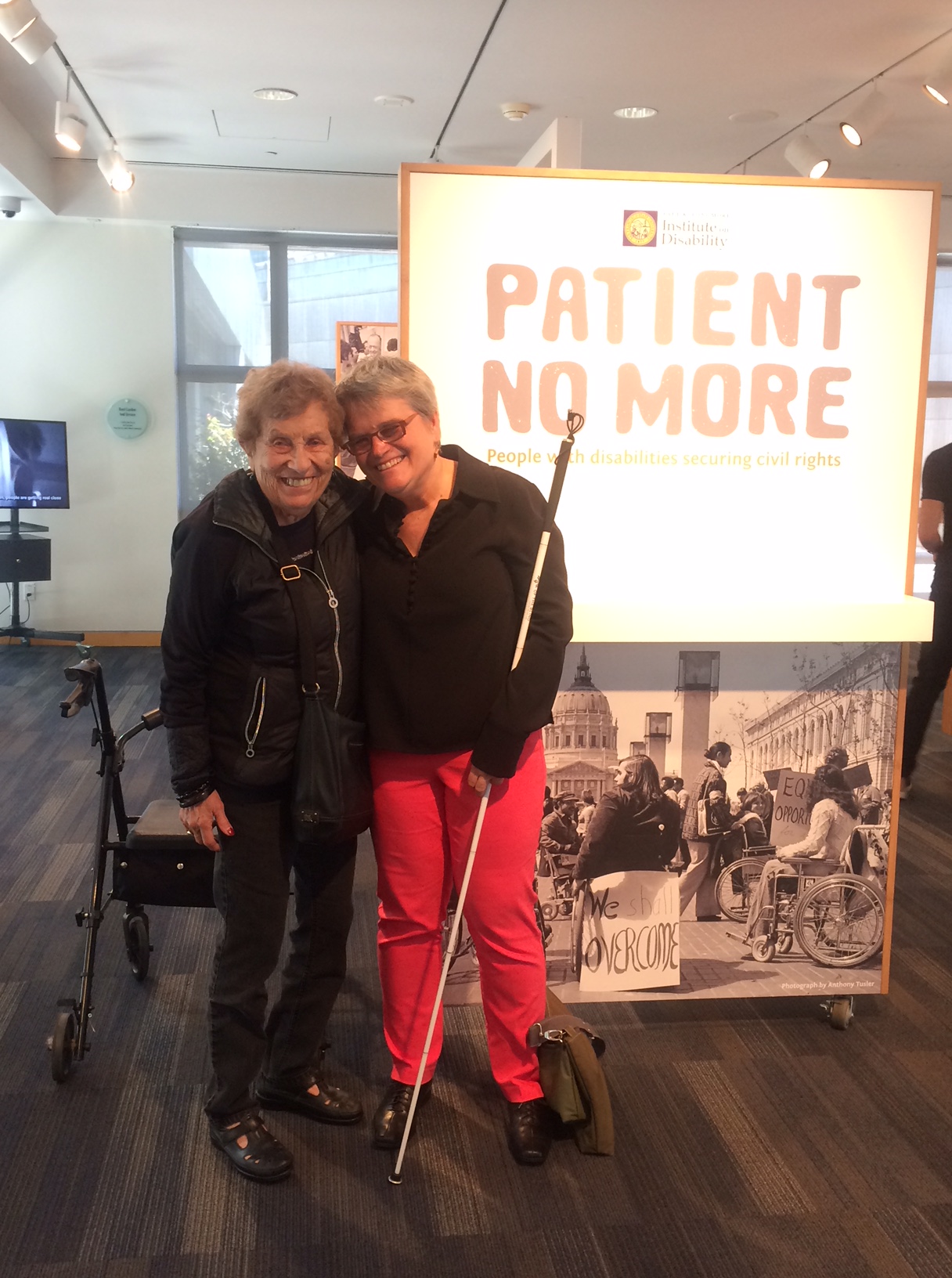